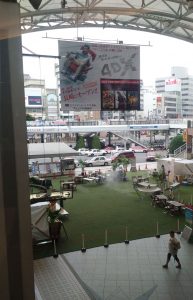 I arrived in Nagasaki yesterday evening after a journey about as bearable as any of such length can be (not that this stopped me from moaning to social media about it).

I’ve been here once before, back in March of this year, and much is as I remember: the sprawling port city with a very walkable centre, enclosed by mountains; the proximity of shipyards to the centre, so that they are part of conciousness; the politeness, of course, but also the rule-following (I’m not sure whether jaywalking is actually illegal in Japan, but it certainly causes tuts and disapproving looks). The one thing that isn’t the same is the climate: what was pleasant in March is now a temperature in the high 20s of Celcius, 100% humidity leaving a permanent haze in the air. It reminds me a lot of when I used to work in the Carribean, and my attitude to moderate rain is the same as it was there: There’s no danger of getting cold, and it’s nicer to be wet with cool refreshing rain than with sweat. When I was working there I acclimatised, to a limited extent, after a week or two, and I’m sure the same will apply here. 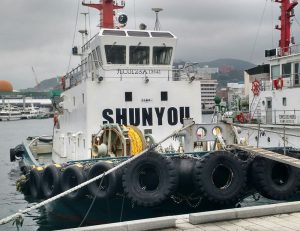 This tugboat appears to have attitude, and to announce it in big letters. Photo: Author.