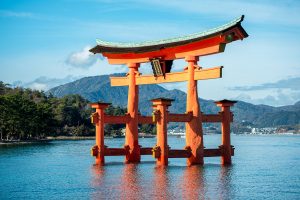 After leaving Fukuoka on Saturday my first stop was the island of Miyajima, literally “Shrine island”. At one time the whole island was considered too sacred for common people to set foot upon, so the famous “floating” temple, with its maritime torii, was constructed on stilts on the coast. I took a cable car to the top of the island’s hightest peak (about 530m) and admired the view right across the Seto Inland Sea. I decided to walk down, but had not anticipated the Japanese penchant for steps… where in Europe the gradient would have resulted in a winding, cliffhugging path, here it was basically a 2.5km staircase. My right knee was not impressed.

At Miyajima I felt a kind of reverse culture shock. For the last six weeks the number of white people I’ve met is in the low double digits, and the number with really fluent English somewhat lower. Here, suddenly, everywhere I look there are people from all over the world. Perhaps this shouldn’t be surprising at one of the country’s top tourist attractions on a Saturday in summer… 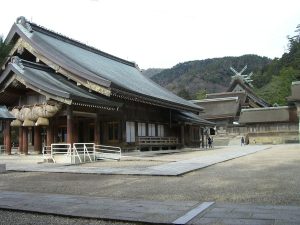 Two days later, after a stop in the hill town of Tsuwano and then a day of travel problems caused by heavy rain, I arrived in Izumo. I visited an Edo-period silver mining area, now a World Heritage Site. Considering its status, there were surprisingly few visitors, and apart from myself I only spotted one group of non-Japanese. In contrast to a few days earlier, things felt more like they had before… apparently the foreigners don’t reach too far beyond the major cities and the shinkansen lines. Later I visited Izumo-taisha, arguably the second most important Shinto shrine and said to be the oldest. Again, I was the only obvious foreigner. I have the feeling that most Brits, and others, visit Tokyo->Kyoto->Hiroshima and then go home.

I’ll be joining them for the rest of my trip: today I’ll be travelling to Kyoto, and eventually east to Nagoya and Tokyo.