Last week, in a change from my usual desk-based work, a professor invited me and two Japanese students to help him with some fieldwork.  An important consideration for marine renewables is biofouling – how fast the subsea surfaces will become encrusted in barnacles and other creatures. A number of people around the world, including researchers at my home institution, are investigating this, but the answers depend a lot on the local water conditions, so it’s valuable to do it in different places.

The experiment is about two hours drive from the university, on the outer breakwater of a small fishing harbour in a fast-flowing tidal channel. We drove over in time for an early lunch before starting work. In this sort of scenario in the UK I’d probably expect sandwiches, but the professor treated us all to a restaurant meal. I have no idea whether this is normal, or whether he is just very kind! This being a fishing village, fish is what they serve. As we entered, a look of doubt crossed the professor’s face, and he asked whether I would be OK with raw fish, clearly expecting that a Brit would not be. I assured him that I love raw fish, and that it is one of the good things about being in Japan… so then I think he decided to challenge me, and/or provide amusement, and he ordered for me. 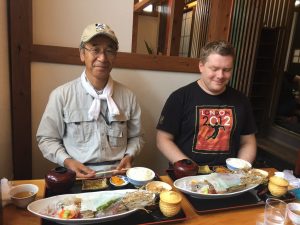 What turned up a little while later was all the edible parts of a whole squid, laid out in strips on ice in a squid shape, raw and transparent. The head and tentacles were taken away to be cooked and made into tempura, leaving me with the rest. I won’t say that squid is my favourite sashimi – I find the taste a little too mild and neutral – but it was certainly nice, and as I chomped my way through I think the three Japanese people present were both pleased and a little disappointed!

After the meal the professor showed me the fish market downstairs, where I saw more squid in a tank along with many, many other aquatic things that I don’t know the names for. And then we set off to do the work of the day.

Suspended on the side of the breakwater was a frame containing metal plates, each with a different paint or other coating. Every month they are removed, photographed, weighed, and returned to water, and that is what we did, as well as collecting data from instruments that were mounted on the frame to record factors such as water temperature. It was interesting work, but did involve being exposed continually to the mid-day sun and 36C heat, and when we finished after two hours I had just about reached my limit for warmth and sunshine.

A good, if exhausting, day, a break from my desk, and a chance to see some new bits of the Japanese coast and countryside. Thank you, sensei! 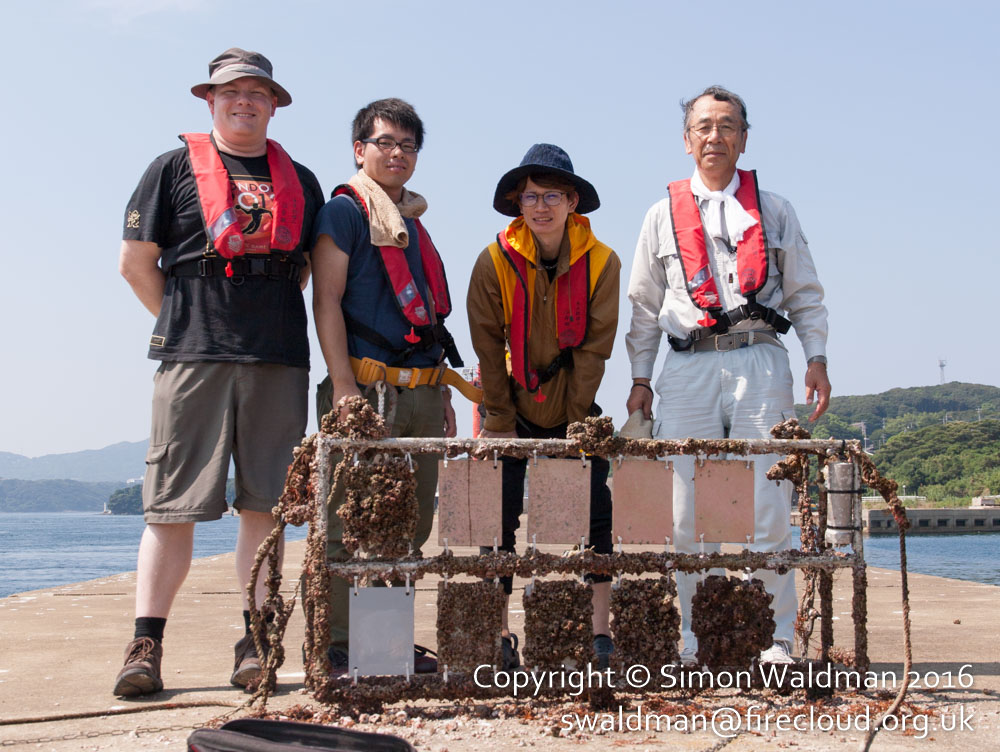