There’s something that I’ve noticed over the course of my PhD studentship: I plan too much.

In my previous, commercial, career, this had worked well for me. When I was feeling bright and creative I would organise all the tasks that I needed to do, and make sure the prerequisites were in place, and then whenever the time was available – regardless of my state of mind – I could sit down and do the work. In the words of an old manager, “You like to line your tasks up, and then knock them down”. 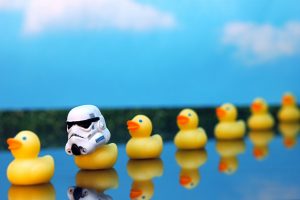 That worked well then, because a large part of the work was technical rather than creative; I had to do things right, with good attention to detail, but once the overall concept was established the execution did not require me to be at my best. Perhaps surprisingly, I’ve had some success in doing academic writing the same way – I produce very detailed outlines, sometimes down to individual paragraph level, which is quite a fast process when I’m at my peak, and then find that I can write from them even when having an “off day”.

But that doesn’t work for research itself because, by definition, with research you don’t know what you will find, and hence you can’t always plan beyond the first set of results. In some recent work I planned out all the tests I’d like to do and the plots that I’d produce from that data… and my supervisor wisely said “see what the first set of data is like first”. That’s a pattern that I’ve repeated a few times in the last few years; I’ve planned far too far ahead, and then some unexpected results have made me throw that planning away.

Lining tasks up to knock them down is a useful technique, at least for me, but it isn’t useful for everything, and I need to develop some more diverse approaches.

7 thoughts on “Discovering my own over-planning”