Yesterday was my viva, or thesis defence for those used to that terminology. For those not familiar, in the UK system this means an oral exam of unknown length, in private, with the candidate and two examiners – one from my university, one from elsewhere. It’s nerve-wracking in the lead-up, and one hears plenty of horror stories as well as the (far more common) good tales.

Mine was fine 🙂 I wouldn’t say that I enjoyed it, as some people describe, but it went for three and a bit hours with only a few difficult moments. My examiners were rigorous yet kind, in that when they identified areas of theory that I was clearly a little hazy about they noted that and backed off, rather than continuing to push. They asked for reasonable changes, which will improve the thesis, and one can’t really ask for better than that! 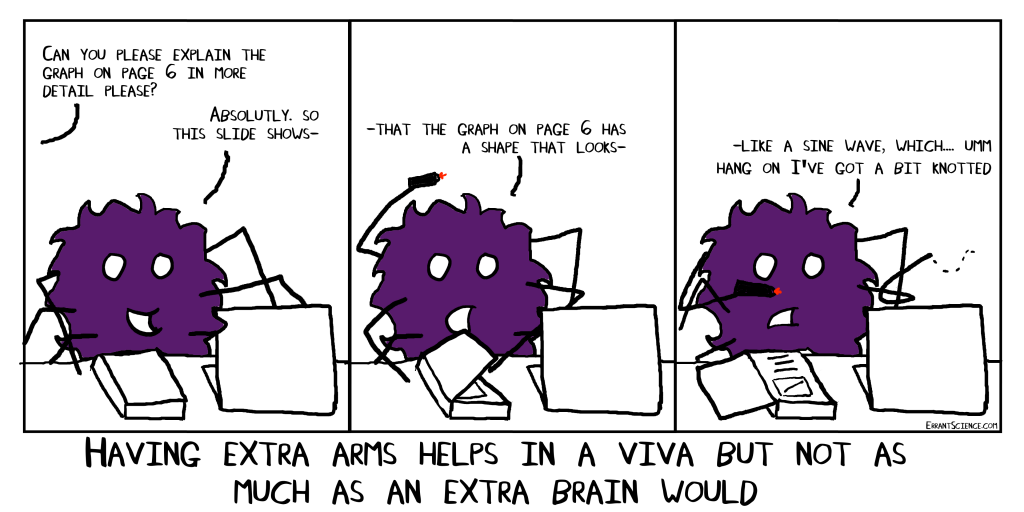 So the upshot is that I’ve passed, subject to corrections. This is a huge milestone, in that – so long as I do the corrections to the examiner’s satisfaction – I will be awarded the degree. It’s certainly the end of a lot of tension; an evening of relief.

Yet, in some ways it doesn’t feel climatic, and when people ask “how did it go?” it’s a little hard to answer – because the vast majority of candidates who get to this stage pass with corrections (their supervisors would advise them against submitting the thesis if they wouldn’t), and it was very likely that I would as well, and I did! There’s no real surprise, or even a lot of uncertainty, involved – the real question was how significant the corrections would be (mine are not trivial, but are managable). So I’m certainly relieved, and relaxed, compared to this time yesterday, but at the same time it doesn’t feel like I’ve finished, because I haven’t. It would perhaps be more accurate to say that I’ve passed a gate and moved on to the next stage, and there’s still work to be done (and bureaucratic hoops to jump through) before I can be finished and move on.