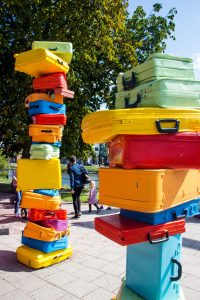 I’m about half way through a one year contract, so of course much of my headspace is occupied with wondering what comes next. (I’d rather it was occupied with great research, or any number of other things. This is one of many problems with the early-career norm of short-term contracts, but that’s another topic.)

As I look around at job adverts, naturally they are all over the world, and also varying in length. Recently I found myself looking at a short one in the US and thinking “I’m not sure I want to relocate intercontinentally for just a year”. My initial thinking was that I’d consider it more seriously for two or three years, but a one-year contract wasn’t worth the upheaval.

Then my officemate pointed out that I had jumped at the opportunity to live in Japan for two months, which is much shorter. I replied that I hadn’t actually “moved” there, it was simply a visit. But where does one draw the line? In my head, two or more years is definitely moving to a place, while two months is definitely a visit. Could a year be considered from either angle?

Possibly it’s less about duration than other things. In Japan I lived out of a suitcase, but I don’t think it really comes down to how many belongings one takes with. Perhaps it has more to do with whether one is getting paid in the other country, dealing with bank accounts, setting up local healthcare provision, househunting, etc.

Food for thought, and in the meantime I’m not ruling anything out.