I’m writing this as a lay visitor; I have no insight into the Japanese planning processes. 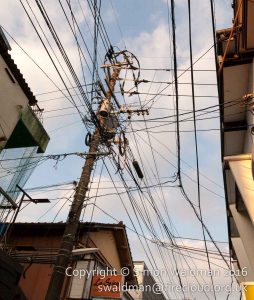 But travelling around the country, it struck me that infrastructure in Japan is visible, and they don’t seem to be ashamed of it. Streets have their power lines overhead, rather than buried – like much of America, but strange and messy-looking to a European eye. In areas suitable for heavy industry, there is heavy industry. One sees large power plants, chemical plants, gas storage tanks, etc., close to populated areas, with no attempt to disguise them. Plans for any of these facilities would cause uproar in the UK.
Most towns, even agricultural ones in pristine valleys, have one or two large radio masts, painted red and white, rising out of a municipal building (often one belonging to the former state telecoms company, or sometimes a post office). Some of these are festooned with microwave dishes, but most just have cellphone antennae now; I suspect that they are the relic of an extensive microwave network that has since been replaced, but they haven’t been torn down. Contrast to the arguments in the UK that led to some cellphone masts being disguised as metallic trees. 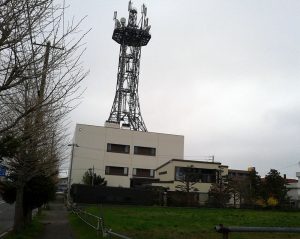 There isn’t much onshore wind power, and I don’t know why that is – but I don’t think it’s likely to be about visual impact, since everywhere one sees electricity transmission lines “marching across the landscape”, with the towers once again painted bright red and white. It’s notable that – in a way that will be familiar to everybody who has lived near such things – after a few days they stop being obtrusive, and become a part of the landscape that is largely filtered out of conscious perception.
The shinkansen, built from the 1960s to the 2000s, zooms across the whole country on elevated tracks, visible for miles in every direction. Recently there have been complaints about noise from high speed trains, and as a result the latest line has noise barriers – which help with the noise but make the tracks themselves more visually obtrusive. Contrast with the “debate” about HS2.

I’m not praising or criticising the British or Japanese attitude here, and I don’t feel that I understand enough to hazard any guesses in public as to the reasons behind the differences, but I found them very striking.